I Know Why the Caged Bird Sings - Maya Angelou

I Know Why the Caged Bird Sings – Maya Angelou

The free bird leaps on the back of the wind
and floats downstream till the current ends
and dips his wings in the orange sun rays
and dares to claim the sky.

But a bird that stalks down his narrow cage
can seldom see through his bars of rage
his wings are clipped and his feet are tied
so he opens his throat to sing.

The free bird thinks of another breeze
and the trade winds soft through the sighing trees
and the fat worms waiting on a dawn-bright lawn
and he names the sky his own.

Get a model question paper for grade 10 1st term test 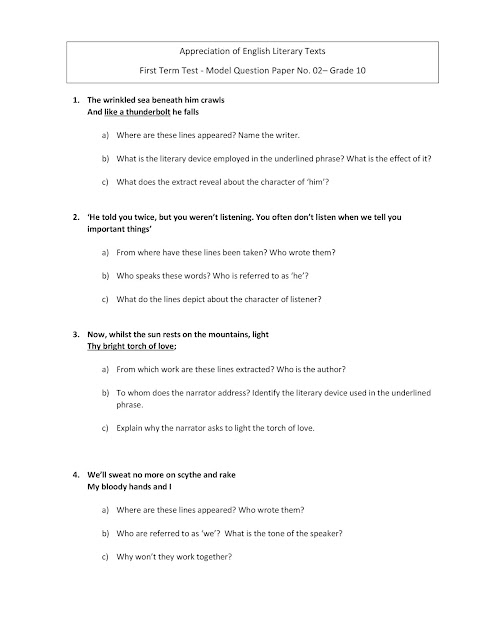 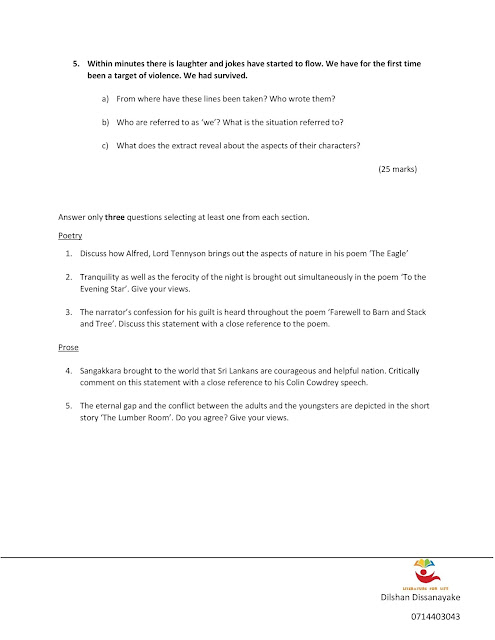 Model questions and answers for O/L

Sample questions and answers for Fiction, Drama and Prose....


The play ‘The Bear ‘deals with some common human emotions and feelings through sarcasm and irony .Do you agree? Explain.
Each and every human being has got feelings and emotions. The Russian playwright and short story writer Anton Chekhov discusses how people response to the impact of their feelings differently in his farce, ‘The Bear’. It was played on the stage for the first time in 1888. The Bear is a one act farce. Chekhov discusses the social attitudes of pre-revolutionary Russia in his plays and short stories. The most noteworthy element in his writing is the use of irony to discuss serious aspects.
The drama is fabricated around a young widow, whose husband died seven months ago. She is still weeping over the memory of him. The behaviour of this so-called virtuous wife brings a smile to the spectator. She vowed herself not to come out of her solitude throughout the rest of her life. As an immature young woman, she clings into her intentions irrespective of their rationality. Her old footman Luka too contributes to evoke humour in the drama. The advices that have been given by him are ironical. But he was able to show a rich vision towards life throughout his funny quotes.
“My old woman died too… I wept for a month. That’s enough for that old woman…” Popova refuses to see anybody and hopes to spend the rest of her life buried among the four walls. When the bell rings informing the presence of someone, she informs Luka that she receives nobody irrespective of the person and the reason he came for. It shows Popova’s rigidity and her queer behaviour brought a sarcastic smile to the spectator.
Smirnov, the male protagonist of the drama enters onto the stage dipping the spectator in an ocean of humour. Though his conduct seems to be funny, it reveals how the land owners treated their peasants during the feudal era. When Smirnov introduced himself proudly to Popova, she merely ignored it and asked “What do you want?” It is utterly ironical as the false pride of Smirnov has been scattered off with the behaviour of Popova. The conversation between the couple turned into a violent row gradually. Smirnov’s inability of controlling the anger brings a smile to the spectator every time. He shouts at everyone including the cart driver of him. Whenever he pulled a chair, it creaks and breaks. It shows the temper of him as well as the strength.
“How I smash your furniture” he says once with repentance. Popova accused that Smirnov is indecent and doesn’t know how to behave before women. But the irony is, not only Smirnov but also Popova is impolite in her diction.
“You are a rude, ill-bred man” this is quite a calumnious way of addressing someone. Hence this discrepancy between her words and the deeds evoke irony.
Smirnov is presented as a misogynist at the very beginning of the drama. He used many calumnious words to insult womankind. “Crooked, envious, vain, trivial, backbites, liars to the marrow of their bones…. Softer sex, philosopher in petticoats, common crocodile… are some of the terms that he used to describe womankind. But the irony is this most rude and crude misogynist became a sentimental lover and fallen on his knees in front of so-called ‘common crocodile’ to plea her hand.
Popova’s bravery is also ironical. She accepted the challenge of a retired lieutenant of army to fight a duel, though she never held a pistol in her hands before. She also requested him to teach her how to fire. Smirnov too challenged a woman for a fight irrespective of her gender. Finally, when Popova says simultaneously to go and not to go to Smirnov, the audience burst out in laughter.
Every human being is subjected to their feelings and emotions. Very few people are able to thrive them. Here in the drama ‘The Bear’ we find both Popova and Smirnov became victims of their own emotions as they were unable to control them. Anton Chekhov brought this common human infirmity using his enormous talent of irony.


Through her letters, we find an utmost grievance of a lonely woman and hapless mother. She lost all her loving ones and left alone in the world. Therefore, ‘Wave’ could be taken as a story of grief. 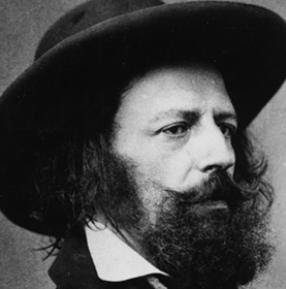 He clasps the crag with crooked hands;
Close to the sun in lonely lands,
Ring'd with the azure world, he stands.

The wrinkled sea beneath him crawls;
He watches from his mountain walls,
And like a thunderbolt he falls.

Email ThisBlogThis!Share to TwitterShare to FacebookShare to Pinterest
Labels: Poetry
Once Upon a Time - Gabriel Okara 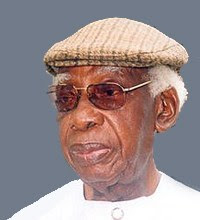 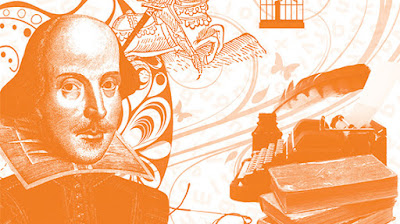